Two-time Grammy award-winners Evanescence are back with their new album ‘Synthesis,’ out Nov 10. To celebrate their fourth studio album, the band plans to light up the Australian East Coast with their new global Synthesis Live tour - presented by TEG Live and Sony Music Entertainment.


“I'm really looking forward to bringing this new and different show to Australia,” says Amy Lee, “Playing the Sydney Opera House is something I've dreamed about all my life. I remember taking the ferry over to Manly during days off on past tours with the band, and looking over at the legendary structure, saying ‘One day, we're going to play there!’ I can't believe it's finally going to be a reality. We're all very excited about it.

It’s not simply a ‘greatest hits’ album! Synthesis takes a selection of Evanescence’s three previous studio releases along with two new songs, and then reimagines them into brand-new recordings.

“The recording is very much tied to the live experience we want to create,” says Lee. “I’m anxiously excited to play some much more involved, challenging piano for the show, and to focus on singing live more like the way I do in the studio.”

Synthesis is an amalgamation of Amy Lee’s masterful singing and piano playing, supported by her band, a full symphony orchestra performing arrangements by long-time collaborator David Campbell as well as an array of electronic music programming and effects.

As their evolution continues, the band is excited to bring Synthesis Live to Australia, performing the record start-to-finish with the expertise and skill of the country’s finest Symphony orchestras for each show.

In Australia, Evanescence holds a huge fan base having sold in excess of 700,000 ARIA accredited albums over their career so far.

***Synthesis will be released on November 10.

The My Ticketek pre-sale opens 12 noon Friday 6 October until 9am Monday 9
October.


For all ticket information, head to www.ticketek.com.au.

🎧Remember this??? Back in 2003, Evanescence performed instore at HMV Mt Druitt, signing CD’s for fans afterwards.

Pic: Flashback photo of Evanescence at the HMV back in 2003. 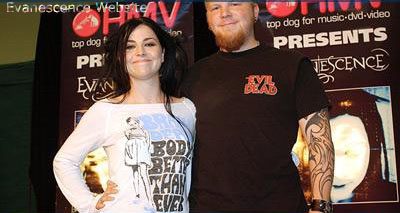