“The best part about Retro Rehash events is seeing what everyone is going to wear!” A statement overheard at the last event by radio rebels and clash curators Retro Rehash. This weekend the jam is over the tracks in Funky Town at the Roxy Room (Gearin) with live music, art, projections, cheap drinks and dress-up plus prizes for the Funky Punky Party.

Featuring live bands and DJs including the Radiators’ front man Brian Nichol, local punx Madam Fatale, 80s funkers Thunder Fox, spy hunters Danger Baby and DJ Idiot Proofo - it’ll be a funk/punk mashup not seen since you last looked in your parents’ closet. So while you are there grab something to wear because dressing up punk or funk could win you some amazing prizes…

The hyperactive and interactive Retro Rehash radio guys have been planning this event for months, with Willem Hendriksen proclaiming that “in Katoomba things that don’t work, do work. The concerts we put on are non-ageist meaning we can have a collaboration of young punks Madam Fatale with legend Brian from the Radiators on stage together! This event really reflects that dynamic of bringing everyone together for a ridiculously fun night!”

Radiating Punk
Madam Fatale will collaborating with punk rock legend and Radiators frontman Brian Nichol, and have been rehearsing madly. Frontman Luke says “it’s been an awesome and quite strange experience. Brian is one of the nicest people and he's quite unassuming for someone who is in such a well known band. It’s been amazing having time to work with him and see how he flows with the band and to also see how he directs what he wants from a show or a song. He's got some serious knowledge about music in general, but the thing that strikes me the most is his ability to recognise and act upon what makes a good live performance. He's definitely taught us some tips. I have to say it’s also quite strange to be rehearsing with someone my mum went and saw quite a few times back in the day!”

Danger! Baby…
Drummer from local spy band Danger Baby Oli says “We've mainly been working on tightening up our current set and breaking in our new keyboard player Sy Dyson. Sy has also brought some new tunes to the band and we hope to pull one or two out at Funky Punky. As always with Danger Baby however, we like to keep it fun and we're all really open to each other's musical ideas and tangents. This means that everyone is writing the songs even if its one member's idea to begin with.”

Eye Gouging Art
Willem explains the interactive experience is not just about bringing genres and ages together either - there is an art exhibition featuring projected works curated by Katoomba’s art coach Linda Swinfield.

The event will focus on fresh or recently emerging visual artists with local connections. Edith Tbay and Karl Kutshe are poised to begin in the art world with this event being their first exhibit. Jeff McCann, Ez Coops and Natasha Wills however have successful careers in the fine arts, film industry, using sound, design sectors and with experimental installation. 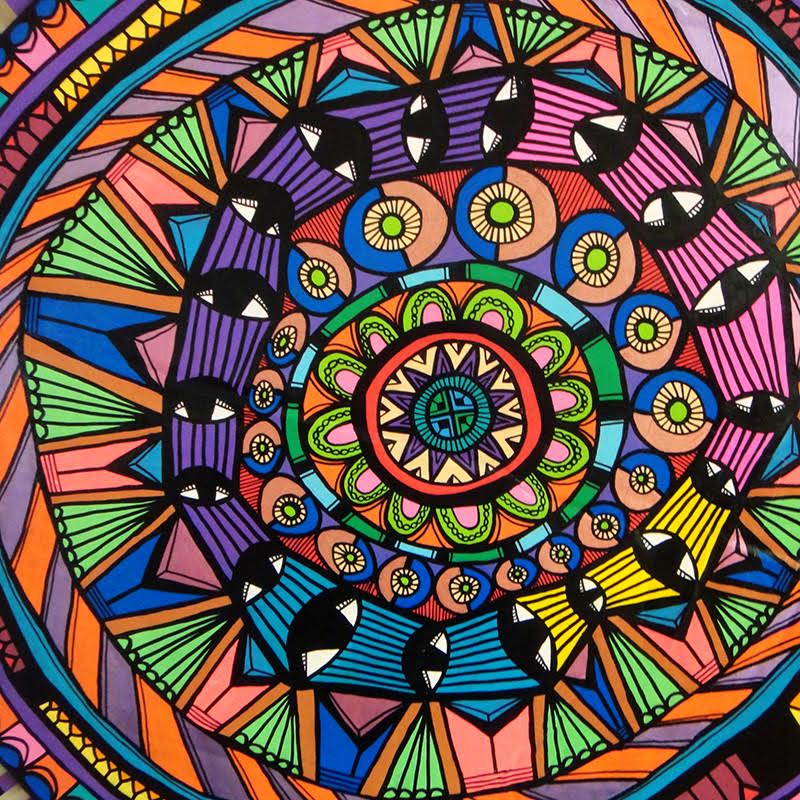 McCann’s work (above) is without doubt seriously funky and is inspired by ceremony, ritual and fashion. He constructs colourful and playful art interventions, wearable products, fine art and has created work recently for Mardi Gras and Sydney Limits.

Wills has her career exhibited nationally. She is a contemporary artist whose works are visceral reactions to the world around her. Her colourful and raw works feed the punk element of this event.

Ez Coops is a multi-media local artist utilising film, sound and design whose work for this event is an immersive psychedelic looped art installation using film.

Linda Swinfield is a mid- career contemporary art maker. As an art coach she believes in grass roots support for all artist’s. She hopes to support art makers to be recognised equally in an increasingly competitive art market.

Just Cause
The Funky Punky Party don’t want you to flash your money around, simply leave it in the tin as proceeds go to Toolo as well as Radio Blue Mountains who are seeking a new antenna to keep local music on your airwaves....