Back in the 90’s, the timeless hit single ‘Somewhere over the Rainbow’ by Irael Kamakawiwo'ole lit up the airwaves and drove Ukulele sales through the roof. On Sat 11th Nov, The Nukes will be keeping the spirit of the Uke alive with their new infused twist, live in Concert at The Metropole Guesthouse!

Folk will be staggered hearing what The Nukes are able achieve when armed solely with innocent little Ukes. Originally formed at the 2008 Titirangi Festival of Music, the band – Dave Parker, David 'Snapper' Thiele and Ben Collier – love to share their quirky brand of musical brilliance, coaxing a fine blend of folk, bluegrass, reggae and post punk out of their innocent little ukuleles.

The Nukes III album recently spent six weeks on the NZ Album Chart Top Ten as well as being in the overall top 40 album chart for two weeks peaking at number 31. Topping the Independent NZ Music Charts for two weeks and has since seen the band tour all over NZ from Kaitaia in the Far North to Rakiura in the deep South and so much in between – over fifty shows, many sell outs, and attendance records broken around NZ.

This visit is the band's fourth visit to Australia in the last five years having headlined and performed at a number of ukulele festivals from Melbourne to Newcastle, Central Coast to Brisbane.

The Metropole is a family friendly venue!
*Minors must be accompanied by a parent or guardian and supervised.
Children do require a ticket for entry.

On the day, tickets will be available $25 at the Door from 5:30pm (Unless Sold Out prior)

This is an intimate seating venue and tickets are strictly limited! 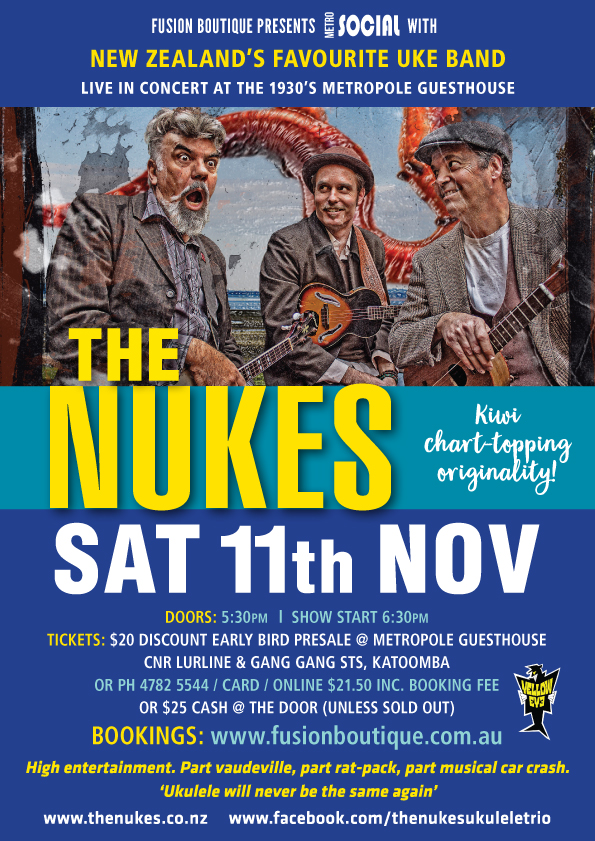