A Hard-On Chat With Peter Black

“Music is the best thing humanity has created. I think we’re lucky because we’re such music geeks…we mixed it all up because we dig it all.” I’m currently deep in conversation with Peter Black, fondly known as Blackie, in a stairwell nestled between Katoomba Antiques Centre, Max Steel’s barber shop and the Velvet Fog record store. We’ve returned from Blackie’s intimate acoustic set at the Fog before a packed, standing floor of young kids, old punks and general music fans, where time was taken to ensure plenty of greetings, autographs and handshakes from the Hard-Ons and Nunchukka Superfly member. Blackie is a grateful man who radiates genuine affection for his fans, despite any hardened exterior. As a founding figure in both bands, playing with the Hard-Ons for nearly 40 years since the group exploded onto the sweaty Punchbowl pub circuit in 1981 as the Dead Rats, Blackie has a vast back catalogue of solo and group material to draw on today. He doesn’t disappoint. 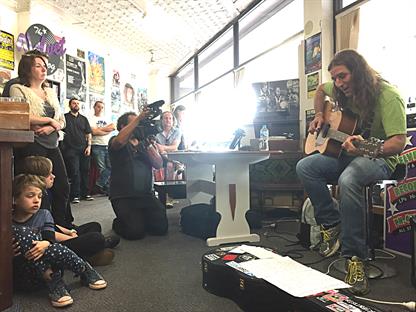 We hear a handful of picks from his latest solo LP, Maybe If I Took My Headphones Off, along with some recent Hard-Ons tracks and the like. The room is filled with sunlight, the mood is cheerful and the crowd are extremely tame, almost disarmingly. We all file in to nestle ourselves among the CD racks, turntables and shelves of vinyl, before leaving within the hour to question the offbeat nature of the man and his music. Whilst casually delivering these varied songs, Blackie displays a conversational, folky sentiment in explaining his creative process, the story behind certain tracks, and remarks on the general music ‘industry’, a word that he believes to be disrespectful. “There’s heaps of people working [in the industry] who don’t give a fuck about music, they just love the status and elitism”, he tells me later. I can’t help but find myself in agreement with this ‘industry’ veteran, a stalwart of the Aussie punk scene alongside such bands as Frenzal Rhomb and the Cosmic Psychos. Complimenting lyrics that veer from insightful to irreverent, quite a lot of fingerpicking and peaceful chords define the set - a world away from Blackie’s loud electric realm of Marshall stacks and European festivals. After Blackie’s 15 year stint as lead Hard-Ons vocalist from 2001, longtime original drummer & vocalist Keish De Silva took over the mic three years ago to make the iconic trio a four-piece, with Keish, Blackie, and founding bassist Ray Ahn.

In 2011, current drummer Murray Ruse replaced Front End Loader’s Peter Kostic behind the kit. Blackie completes his sharp and nasal singing style with a handful of high notes, at varying levels of accomplishment. Describing the origins of his unique vocal delivery, he explains, “for the first four years of doing solo stuff [beginning in 2012], I’d be completely terrified at almost every gig. It’s insanely hard and it made me realise how shit my voice is. But for the last two years I’ve had a singing teacher, and I tried hard to present THIS in a better fashion.”

Despite any eagerness for imminent vinyl digging, he largely keeps the crowd in the palm of his hand for the full performance, totally absorbed in the mood of the moment. Certain steel notes are left to ring longer to emphasise atmosphere and drive home the emotional force of songs, with the incorporation of a pick and more strummed, punk chords within the set’s second half, where some of the best songs lie. Even within an acoustic setting, Blackie defines his live approach by constantly maintaining a distinctly high level of energy, an imperative factor for the performer. “Every time I play I want a gig buzz…it’s a high that I’ve never gotten tired of.” In describing a story from the Hard-On’s show at Hellfest in France last year, Peter also explains how a crowd’s size doesn’t determine how intimate one can be with the audience.“There’s this young kid in the front row, and he’s looking right at me. He’s with his mum and they’re getting squashed by thousands of people behind ‘em and the kid’s loving it! He saw that I saw him and he started going crazy, giving me the horns and shit, and I pointed at him. He’s totally awe-struck, he looked at his mum and he just went nuts. For me, that was the best part of the whole show. That’s thousands of people, but I had an intimate moment with this nine or ten year old kid.” 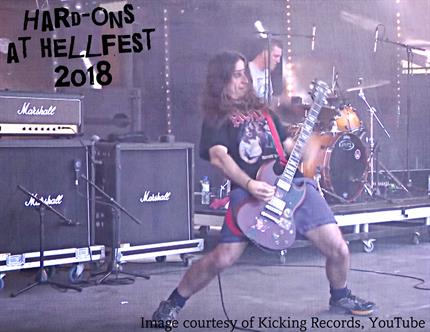 Prior to the Hard-Ons coming to Katoomba to headline Pyjama-Rama on May 18th, I was eager to enquire into the touring history of the group, and the wildest gigs ever played by the band. Blackie’s only too happy to oblige, detailing tour dates and performances in jails, moored boats and squats, while endorsing the resourcefulness of European youth in re-appropriating abandoned buildings into art galleries, venues and multi-purpose spaces. Throughout Blackie’s solo career, some equally strange venues have also hosted his acoustic sets, including outdoor art galleries, house shows, and even a mellow, intermission slot at a rave, while touring Europe with French artist Forest Pooky in 2015. As we talk, it becomes clear to me that Peter Black’s life is governed by a tireless sense of ambition and fuelled by a deep love of songwriting, characterised by a craving for energy that never wavers. As Blackie’s devoted, prolific songwriting approach often intimidated fellow band members through the sheer amount of songs being brought to rehearsals during busy work weeks, periods of family issues or the like, this served to cement his decision to branch off additionally into solo work, being totally self-directed and flexible. He also describes the allocation of songwriting for his two groups, writing five new songs for Nunchukka Superfly to one new Hard-Ons song, as the latter group have covered way more musical territory. Despite this, Blackie is pleased when the group can find ways to re-interpret their old sound, resulting in some fresh, classic-sounding moments on more recent material.

I’m curious to learn the backstory of his gargantuan Song A Day project, a peak of creative drive that was carried out for a whole leap year from 2016 to 2017, resulting in over 365 songs. In choosing to undertake the monstrous task, Blackie essentially retreated from the world to live like a monk, despite playing some Nunchukka Superfly shows in France. Writing and recording new songs every day with full band arrangements and a full album being released each month, Blackie also drew every album cover by hand, remarking that the entire project, although draining, was incredibly fun. “I had a massive backlog and I was turning 50 as well, so I thought I wanted to do something huge.” Despite periods of creative exhaustion, Blackie would find his creative cogs turning again with the impetus of simply starting a new song. “Once I started, all you need is that little spark and that leads to another, which leads to another. I’ll be jamming on my own, layering, and I loved it. I loved every second of it. Even though it was hard.” Celebrating the friendly work ethic and enthusiasm of production engineer and Frenzal Rhomb singer Jason Whalley and his three-man ‘pitstop team’s musical, production and distribution work, Blackie knows that the project wouldn’t have been possible without this. “When I got to the end I felt bizarre, I felt really strangely empty, but very happy, and very satisfied. I still write all the fucking time.” 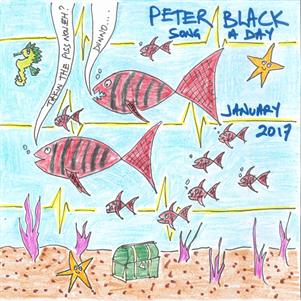 In hindsight of a vast back catalogue, comprised of 11 LPs, 12 EPs, 4 singles, 10 compilation albums and an upcoming album release entitled So I Could Have Them Destroyed, enquiring what the Katoomba crowds at Pyjama-Rama can expect the Hard-Ons to perform was greeted with a quote from the Beach Boy’s Brian Wilson. “New songs are always more exciting, it’s without question”. Despite an urge to perform the entire upcoming LP at Pyjama-Rama if given the chance, Blackie reasons to the sake of maintaining audience expectation and playing within the working parameter of the band’s style. “If I went to see Slayer and they didn’t play ‘Raining Blood’ I’d be pretty pissed off”, he explains. Acknowledging that certain songs do have a use-by date, Blackie describes their method of choosing set lists as 40% new stuff, 60% back catalogue. Put quite simply, “if you don’t get a kick out of the song, you can’t perform it, so it’s fake to do it.” In regards to the upcoming album, the first official release as a four-piece, Blackie is over the moon with happiness for the album mixing being completed, with four or six new songs being included in the Pyjama-Rama setlist. The successful creative formula for the Hard-Ons derives from fulfilling artistic satisfaction through a level of experimentalism, while also staying true to a degree of musical expectation; the sweet spot of genre, tone, pace and attitude in a musical balancing act that took a while to perfect. Although undertaking a three-year hiatus from 1997 after the release of the overly-experimental Too Far Gone, the Hard-Ons still reformed to come second to Nick Cave on national record sales charts, making them Australia’s second most successful indie act. Even though snobby music consumers still have problems with respecting the global success of a puerile punk band, the Hard-Ons are here to stay for the long haul. “We take our music extremely seriously, in the way we play, rehearse and write. All that is 100% pure love. I think, if you disrespect your art, you shouldn’t be doing it.”

After a national March-May tour with Rose Tattoo, The Hard-Ons headline Pyjama-Rama at the Baroque Room on May 18th, with supports from Madam Fatale, Merekat and Glam Jam. Tickets available through Facebook or on the door.    So I Could Have Them Destroyed, the group’s 12th album, will be out later this year. Peter Black’s Maybe If I Took My Headphones Off is available on Bandcamp or Peter Black Solo.com, along with the rest of his solo albums. Cheers!