Guiding audiences along journeys of eclectic electrics, ‘powerhouse pixies’ HumUmbra have flourished into a unique force in our local musical microcosm. Their debut music video ‘New Land’ is a fiercely original, slow-burning work of grace and meaning that examines the physical concepts of relationships.Corin Shearston unravels more meaning behind the music.

Exhibiting an offbeat style of ‘electronic quirk pop’, members Gigi Ray and Georgia Webb formed their project midway through last year. After discovering an online clip of Gigi singing an original piece accompanied with body percussion, composer Georgia was struck by the arrow of inspiration to create some synth sounds for Gigi’s vocals. Secretly keeping this remix, Georgia then showed the singer her results, knowing they needed to make more music in this way. Thus, HumUmbra was born. Tireless creativity led to the proud release of debut EP Arcanum in June last year, aided by Georgia’s digital innovation. A lush, intricate and exciting concept album based on the divination of the Tarot, the five-track release signified HumUmbra as a newly found breakout act.

Through sounding out their audio-lyrical ideas, a collective vision was focused to understand where the sweet spot lay in the eyes of the public; thus being the ultimate yield of Arcanum. Georgia and Gigi promptly went on to turn heads and catch many eager ears, from their initial festival appearance at Just Quietly to a musical guest slot on Retro Rehash at Radio Blue Mountains to Sydney performances at the Record Crate in Glebe and Bizarre Haberdashery’s charity event in Marrickville. An exciting singles launch of HumUmbra’s ‘New Land’ and ‘All You Need’ is now planned to take place on September 27th at the Knox St Bar in Chippendale, in support of oddball champion Scruffamudda; find out more on Facebook. Naturally, one asks ‘where to next?’ HumUmbra are happy to simply keep the music coming and the gigs following close behind, says Georgia. Gigi, however, has a special ambition for connecting a love of music with their love of festivals, bringing the group to more over the years.

Firmly grounded by music’s joy and unity, HumUmbra have now found more public accessibility through a newly-honed ‘pop’ appeal, dealing in immersive bass, driving rhythms and exploratory melody machines. Satisfied that their latest material fully represents their live chemistry, new singles like ‘All You Need’ and ‘New Land’ honour the adaptation to instil more personality into musicality. As Georgia explains to HAZE however, “At the same time I also feel like we are still on a very exploratory trajectory…in a relaxed and having fun kinda way.” Remaining true to this spirit of fun, HumUmbra’s live DIY costumes reflect this, incorporating pom-poms, smashed circuit boards, ‘jellyfish’ material hoop frames and a bold barefoot approach to honour the resourcefulness of the Blue Mountains. This has even led to a lighthearted push for Eurovision from fans! 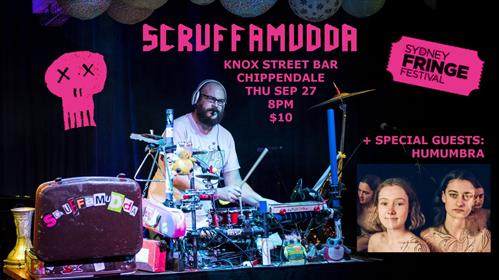 For the written thoughts of HumUmbra, lyricist Gigi Ray has steered their electronic vessel to understandings of varying human experiences. More topical themes have emerged lately however, such as the way emotions are experienced within the mind and the body, with rumination on both the Earth and our bodies as organisms.Using evocative personal experience through her song lyrics, Gigi also attempts to relate to collective human attitudes, knowing she’s hitting home with something true if she can feel the original words in her body. Georgia’s immersive compositions craft entire landscapes around these feelings, she tells us. HumUmbra have now started experimenting with new songwriting methods for their upcoming body of work, such as Georgia completing the final music before Gigi bestows her words on these creations. This is opposed to the process for Arcanum, where all lyrics were finished before synths, effects and beats were inspired from them. Meditating on the themes that inspire ‘New Land’, HumUmbra view both the Earth and humans as almost identical beings, portrayed through the simultaneous drawing of topographical lines on the bodies of Georgia and Gigi. “In the same way humanity has shaped landscape and culture, we shape the internal landscape of everyone we engage with", says Gigi.The shadowy minimalism of their film clip echoes this sentiment perfectly.

Bringing us into the present with this genre-defying, thought-challenging group, an ‘earth shattering surprise’ is in the works for HumUmbra fans. We shall wait to see where time propels these bold young artists.