In the midst of a modern age of overly-saturated technological resources and tangled communication networks, many small-scale community organisations have devoted their time to the educational empowerment of young people. One main focus is the reduction of stress and confusion that is inherent in the youth, borne from their inexperience in daunting socio-economic systems. When younger generations pair these struggles with a declining sense of global hope in the face of environmental crisis, community groups seem to be faced with a ‘tough crowd’ of drifting Gen Z’s-to-Millennials. Community groups understand this. Whilst knowing this predicament, they can’t promise to save the world, or widely improve nations, but they CAN re-introduce the importance and strength of people power, boost solidarity between generations, and encourage communication for what really occupies the minds of our youth. As we identify rapid changes within many Australian industries, another main aim is to develop tertiary learning by finely honing the talents and passion of our youth. This is where young demographics can be combined into adaptable workforces for the future. Let’s remind ourselves that organised groups can achieve great things, helping to tackle some of the flaws that impede progress for our lives and our planet. Now let’s hone in on the cultural microcosm of the Blue Mountains, NSW, where these circumstances still apply, and where society is condensed, with issues of unemployment, poor mental health and drug abuse being intensified by a general lack of space, infrastructure, opportunities, and subculture. These problems can be particularly hard on young people. Fortunately, the noble work of a charity known, fittingly, as The Big Fix, has spawned four different community programs, devoted to empowering the young, the old, and the young at heart. Under the guidance of their seven industry professionals, activities are facilitated at numerous spots around the upper Mountains, and at a centralised residential location in Blackheath.

In speaking to Lis Bastian, Director and Founder of The Big Fix, co-ordinator of Blackheath Community Farm, and editor of The Big Fix Solutions Media, (‘the fixing news, not the breaking news’), we found that she was more than happy to inform us on their current projects, including Edgy Blue Mountains, a ‘collaborative social enterprise incubator'. Providing young people with a plurality of learning opportunities from a range of industries, the Blue Mountains Pluriversity is one of the most popular youth-targeted programs from The Big Fix, and was the main sponsor of ‘The Gig’, held on the 13th of December at Katoomba's Junction 142. Graciously receiving a BMCC City Of The Arts Trust Grant from local council in July, the Pluriversity recently introduced their first Arts Program and hosted a series of workshops, forums and classes from an industry-spanning array of professionals. Rather than just being something to do, these events are targeted at encouraging industry-based learning and building networks. ’The Gig’ signified the start of proper music-related learning from the Pluriversity, who wish to introduce more social activities and work experience opportunities for those aged 16 to 30, the target demographic for their activities.

Following on from an artist’s forum held on the 15th of November at Gallery ONE88 Fine Arts, Katoomba, hosting talks from opera singer Taryn Srhoj, dancer Julian Renlong Wong and light projection artist Cindi Drennan (Illuminart), the Pluriversity also want to offer opportunities for learning with Illuminart. Signifying the relevance of such skills, Bastian reminds us of the potential for future jobs to flow from such arts programs as Vivid Sydney. Coincidentally, Cindi Drennan and Taryn Srhoj were both involved in ‘The Gig’, with Drennan’s young team composing a mesmerising projected light piece to play in time to John Lennon’s ‘Imagine’, and Srhoj leading a young choir in a live vocal rendition of the song, complete with audience participation. Likening the message of ‘Imagine’ to an unofficial ‘theme song’ for the Pluriversity, Bastian explains that Srhoj chose the number as a meaningful track for people to learn in a short time. Witnessing its gospel ambience reverberating at the chosen venue of Junction 142, the experience was almost ethereal. It’s nice that they brought new life to a song that’s nearly half a century old! We were also treated to a piece of of opera-meets-somatic dance, resulting in many audience members getting a lot more than they were expecting. (Under-promising and over-delivering; a very effective business model). The decision to host ‘The Gig’ at Katoomba’s Junction 142 stemmed from loving the ethos of the Junction committee and team, and the work they do with organisations such as Earth Recovery Australia and Toolo Tool Library, Bastian says. The Big Fix’s Solutions Media community ‘zine has also featured articles about the venue and its significance as a popular space for youthful expression and catharsis, which lends it the moniker of ’the unofficial home of Blue Mountains punk’. As long as we continue to respect the space, the security guards do their job, and no-one gets hurt, we should continue to see gigs there for many years to come.

In fulfilling the dynamic musical talent on display at ‘The Gig’, a classic lineup of local and Sydney-based indie rock and local psychedelic funk was a definite crowd-puller, with different runs of promotional posters showing different bands on the bill. Although indie-rockers Blumesday had their name at the top of the poster, they actually played first, with suave singer Trevor projecting his smooth chops over the explosive energy of drummer Ezra, the rhythmic cool of bassist ‘Dr. Curry’ (Ethan), and the vibrant lead solos of guitarist James. As James pressed on amidst some technical difficulties, with the set culminating in an erratic cover of Journey’s ‘Don’t Stop Believing’, some radio-ready hooks were already on display, with four unique stage presences mildly vying for attention before an extremely hyped-up crowd of kids.

If we can picture Blumesday as a peculiar conglomerate of individual musicians, the second group chose to band together as a single, dexterous, multi-limbed organism, known as Safire Palms. Displaying a loose, personable attitude with a shared hippy mindset, the spontaneous intensity produced by these four young men was in definite opposition to their ‘chill’ vibe. Precise, tight and ludicrously funky, Safire Palms were dripping in showbiz cool from the get-go, offering sexy, swaying tunes with up-beat dance floor jumps. Performing such tracks as their new, grant-sponsored single ‘Jam Sandwich’, and popular fast-pumper ‘Hazey Days’, which was recently recorded and filmed live in a bus for social media on Retro Rehash, Nic, Rory, Riley and Bailey were in peak form. We even heard a cover of MGMT’s ‘Electric Feel’, which the crowd suitably went nuts to. Towards the frenetic end of the last song, Bailey the drummer injected some energy that verged on the intensity of hardcore punk, before tearing away from the band to pour his sweat into a blurry and breathtaking drum solo until climbing up on his stool and throwing his sticks into the crowd. Bassist Riley tore up the neck with some lightning finger ability, while guitarist Rory bounded around the stage to pick, strum and wah-out some memorable licks and grooves over the dizzying, soulful multi-tasking of singer/keyboardist Nic. We then took a well-earned break. 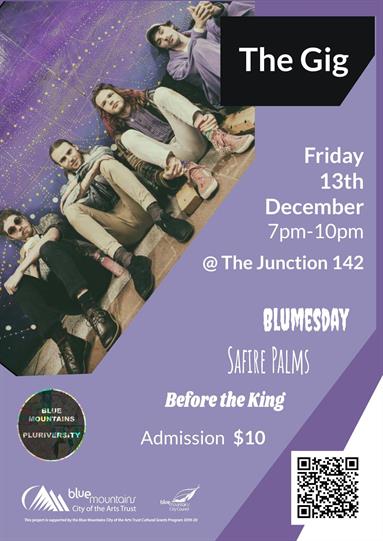 Taking a page from the good book of The Strokes, Arctic Monkeys and Kings Of Leon, Before The King closed the night with tidy, dynamic set of original rock tunes from Sydney, featuring local lead guitarist Oscar, “formerly of Korowal High School, who is currently studying contemporary music at the Conservatorium”, Bastian says. “Blumesday and Before The King had [previously discussed] performing together in Sydney, but Before The King had never performed in the Blue Mountains, so we thought it was great to start that performance relationship. We are thrilled that there is so much great, young, musical talent in the Mountains and we are keen to create more opportunities for them all.” In processing funds from ‘The Gig’, all proceeds went into paying all musicians involved, along with paying the sound technician and the venue fee, while Bastian’s team were content to celebrate a busy and rewarding year of community action.

While the Pluriversity already allocate a sizeable focus on established courses like Permaculture and Social Enterprise Design, their emerging Arts program exists to offer more inclusiveness for those of a different skill-set. As Bastian explains further, “our goal is to respond to what young people need and are keen to do, so we’re always consulting about future opportunities and are keen to hear from everyone about what they’d like to see us do.” This puts a significant amount of power in the hands of ‘switched on’ young people from the Mountains and beyond, leading to a push for education in a wider array of topics next year, such as Media, Theatre, Bush Regeneration, Conservation, Cartooning, Philosophy, Mental Health First Aid Training, and workshops taught by refugees. The Pluriversity will also be hosting fortnightly pot-luck dinners with inspiring mentors, and are always open to suggestions of new teaching topics.

It would be terrific to see a heightened surge of industry-based education and togetherness amongst the disillusioned and determined youth of the Blue Mountains. Will the work of groups like the Pluriversity serve to equip these kids with many of the finer skills that are required for rewarding careers? You may say I’m a dreamer, but I’m not the only one.