With resourceful instrumentation, a memorable vibe, and a unique musical atmosphere resonating as more than the sum of just two men, Ben Connor & The Butterman delivered another finely honed set for the Winter Magic Festival. For these musicians, the immediately noticeable physical detail would have to be percussionist Stuart Christie’s eclectic ‘drum-kit’, featuring one large muffled djembe in place of a snare, one tiny djembe next to a similarly proportioned cowbell, and a little crash cymbal next to a miniature tom-tom. In comparison, Ben favours a more economical guitar set up, with one steel string acoustic, one electric and a bulky, retro amp, though his intimidating pedal board maintains the visual spectacle. Although having played to larger crowds in the past, the pair effortlessly readjust their approach to maintain a similar atmosphere to previous gigs, delivering many moments of subtle intimacy. A longtime advocate for the power of economical songwriting, Ben displays this sharpened skill himself with a love for the vitality of poetry, traversing through a range of genres in a tidy seven song set. 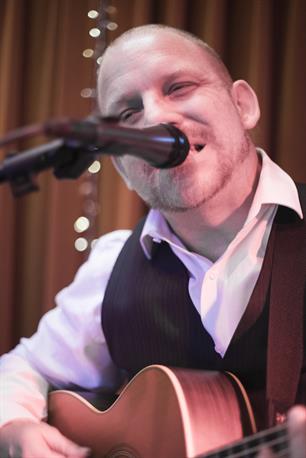 After a swampy blues-stomping soundcheck, the duo glide into a melancholic piece of pop with Ben’s eyes closed nearly the entire time, channeling a vintage folk authenticity through his husky voice, (mirrored in a dapper vest and pants combo). With Stuart contributing some complementary whistling along with a mesmerising range of percussive techniques, the second song becomes a spacey piece of vaudevillian reggae, now with Stu lending some guitar backing behind the kit while keeping time with his feet. Winding through regretful tales of women, homes, cities and the bittersweet comedy of life, any residual anger now come to the forefront in song three, simply entitled ‘Kiss My Ass’. Although performing with a considered level of restraint due to the size of the venue, Ben delivers a scorching rock chorus and wolf man howl to drive the message home, throwing in some classic blues licks with Stuart offering a chugging guitar groove behind the drums. The fourth song cools things down through its dark, sombre tone, as Ben shuts his eyes to offer some evocative lines of intoxicating language. The remainder of the set maintains this contrast of style and emotion, with particular phrases jutting out like street signs over a smoky, labyrinthian metropolis. “You were a hoity-toity in a bistro south side waiting. Colder than steel, my Achilles heel was exposing… Build me a fire in the snow and warm my bones…”

Like all good songwriters, most of Ben’s lyrics are careful not to literally imply much, but merely hint cryptically at potential situations, allowing us to draw our own meanings from the songs. As the duo reach the inevitable end of their set, we’re left to consider a lingering creative atmosphere which is raw, resourceful and quite remarkable. A poetic session of valuable insight coupled with uplifting and cathartic rhythms. Sounds like a winning formula.