Perfectly complementing the buzzing and packed confines of Aunty Jacks to celebrate one year of Slack-Off Sundays events, stylish Hawkesbury bluesman Willem Roorda reflected the family atmosphere of the venue to play alongside his dad Jeffrey and partner Jeremy as Blue Sherlock. Having performed at the inaugural Slack-Off Sundays, Willem truly went full-circle to present many worldly fragments of groove-laden introspection, refracted through a traditionally laidback and spacious Blue Mountains lens. With certain original songs resembling contextual travel souvenirs rather than simple verses, choruses, solos and interludes, Blue Sherlock also mixed in covers from the likes of Tom Waits and old-time blues singer Leroy Carr, fitting with the vibrancy of their surroundings while representing more than the sum of their parts. 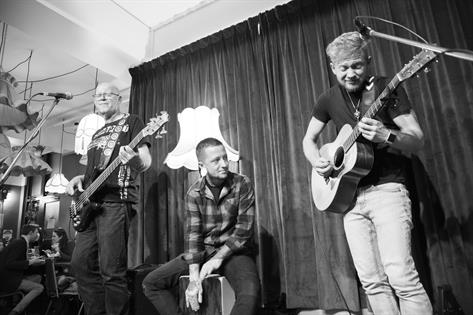 With electric bass, cajon (latin wood percussion box), electrified acoustic/electric guitars, two voices, and Willem’s plethora of guitar pedals, most of the set defined an original feel of steadily paced, deeply groove-laden licks, riffs and melodies, with a rock solid yet innovative backbeat from Jeremy. Over our course of the seven pieces we were there to witness, Willem and his ‘Bass Daddy’ Jeff also blended in some sublime gospel harmonies to emphasise mood, with frontman Willem digging in to a gravelly vocal tone to heighten energy and drive certain words and phrases home to the captive audience. As songs ranged from sultry wah-wah funk to hypnotically deep blues, Willem embodied the heart of a guitarist with the mind of an intellectual frontman and songwriter, giving himself time to peel off spidery solos while staying true to the structural tightness of his pieces.

As three unifying beacons of positive energy, Willem tirelessly exuded happiness and confidence while up on stage with his family, the older, well travelled ‘Bass Daddy’ and content tattooed percussionist Jeremy. Moments of verbal discourse were carefully chosen to explain musical meaning over the dining din, such as before the sixth piece, a beloved cover of a song once heard at St Mary’s Leagues Club when ‘smuggled in’ as a youngster, to song seven, one of the first things Willem ever wrote. The performance truly exemplified this set as being from a time of career evolution, before Blue Sherlock locally record their live debut EP to tour it briefly around Europe later in the year and return home for some more shows in the Blue Mountains. Over the course of the night, knowing the inner workings of Willem’s head was anyone’s guess, but his soul was often exposed through his many faces of transportive musical bliss. Blue Sherlock are here to groove, and they mean every note of it.